“And then my soul saw you and it kind of went “Oh, there you are. I’ve been looking for you.”

It was a day after Qatar’s National Day, I was 37 weeks and 3 days pregnant and was scheduled for induced labour. My OB-GYN was against in waiting until my due date since I have Gestational Diabetes and asthma. But he allowed me to try normal delivery through induced labour.

I was scheduled to be induced at 8AM, 19th December 2018. My then-husband didn’t have any sleep as he came directly from a restless workweek due to the celebrations. He was so tired, but he was with me at the labour room waiting for the contractions to happen.

We waited for around 3-4 hours for any strong contractions that would help me in my labour and they already gave me the full dose of medicine, still, I could only feel slight thumps on my belly. They checked the baby if she was in any distress or anything was wrong. They found nothing, the baby was just sleeping soundly inside and my OB-GYN said she was just too big for me to come out normally.

At around 11AM, my OB-GYN finally decided that I’d be on an emergency cesarian section at 130PM since he didn’t want to wait for the baby to be distressed. He was so nice to explain to me in English then to the dad in Arabic (my OB-GYN is Egyptian and my ex is Moroccan) so that we both know the situation. He had not been able to sleep for even a while and he had to go back to the restaurant he was managing to check his staff and eat something as his last meal was the night before.

It was already 130PM and the dad was nowhere to be found. His battery was empty and we couldn’t reach his work phone as well. The OB-GYN was waiting for him since I couldn’t be sent to the operating room without his consent as it was major surgery. We tried all ways to contact him until finally, he came before 230PM stating he was stuck in traffic and had no time to charge his phone.

I was sent to the operating room at 230PM and the last thing I remembered was that I was being told to just calm down and relax. And boom! Off to dreamland.

My baby came out at exactly 258PM, 19th December 2018, weighing 3.65kgs and has the chubbiest cheeks ever! She has the cutest red lips and chinky eyes. I wasn’t able to see her until I was brought back to my room (I was knocked out from the anaesthesia for an hour). My ex-husband was the one who held her first (I am uberly jealous!).

And just like that ~ I am completely, madly in love with this little Filipino-Moroccan… ♥♥♥ 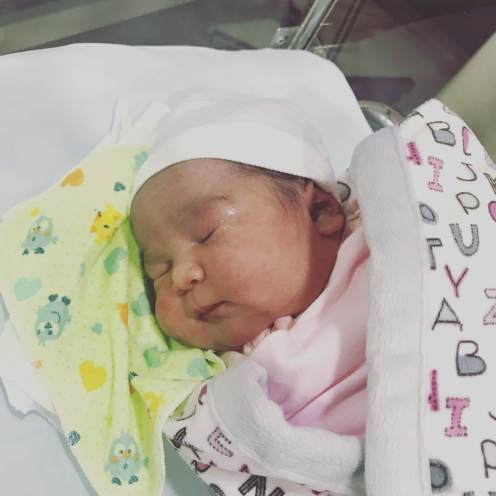