Today is his Feast Day.. 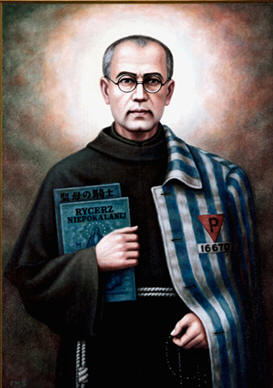 He was born on 8 January 1894 in occupied Poland: he joined the Franciscans in Lwów in 1910, and was ordained eight years later, as his country became free and independent for the first time in over 120 years.

He believed that the world was passing through a time of intense spiritual crisis, and that Christians must fight for the world’s salvation with all the means of modern communication. He founded a newspaper, and a sodality called the Knights of Mary Immaculate, which spread widely both in Poland and abroad.

In 1927 he founded a community, a “city of Mary,” at Teresin: centred round the Franciscan friary, it attracted many lay people, and became self-supporting, publishing many periodicals and running its own radio station.

In 1930 he went to Japan, studied Buddhism and Shintoism, and through the Japanese edition of his newspaper spread the Christian message in a way that was in harmony with Japanese culture. In Nagasaki, he set up a “Garden of the Immaculate,” which survived the atomic bomb.

He also travelled to Malabar and to Moscow, but was recalled to Poland in 1936 for reasons of health.

When the Germans invaded in 1939, the community at Teresin sheltered thousands of refugees, most of them Jews.

In 1941 he was arrested and sent to the concentration camp at Auschwitz, where he helped and succoured the inmates. In August of that year a prisoner escaped, and in reprisal the authorities were choosing ten people to die by starvation. One of the men had a family, and Maximilian Kolbe offered to take his place. The offer was accepted, and he spent his last days comforting his fellow prisoners.

The man he saved was present at his canonization.

Maximilian Kolbe’s martyrdom is the least important thing about him. We are none of us likely to find ourselves in a position to emulate his sacrifice, and speculation as to the heroic way in which we would have behaved in his place is a pernicious waste of time. What is important is that he acted the way he did because of who he was – or, rather, because of who he had become. It is because of who he had become that we revere him as a saint: he would have been a saint (though perhaps not canonized) even if he had not been martyred. And that process of becoming is something we can all emulate. We can all become people for whom doing the right thing is obvious, natural, and easy. It requires no heroism, no special gifts: just perseverance, and prayer.